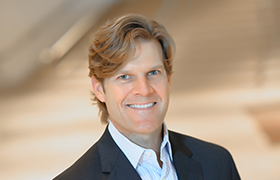 As True North’s CEO, Scott Wood is the architect of the firm’s vision, strategy and culture and is a voting member of the firm’s Investment Policy Committee. He also shares responsibility for shaping the growth, profitability, and marketing of the firm. Scott is an entrepreneur and business-builder focused on creating an enterprise that loyally serves all its stakeholders.

Scott holds the distinction of being a Certified Investment Management Analyst® (CIMA), awarded by the Wharton School of Business, and is a Chartered Private Wealth Advisor® (CPWA). He is also an active member in the Investments & Wealth Institute (formerly IMCA).

In July of 2000, Scott Wood and cofounder Mark Gehlbach launched True North Advisors. Their simple idea was that the industry was broken; it positioned the advisor and client on opposite sides of the table. The industry norm was for the advisor to operate as a salesperson, marketing products for commission, regardless of the client’s outcome. The client was viewed as a customer rather than a partner, and that needed to change. Scott and Mark launched True North with the single goal of eliminating conflicts of interest in the client-advisor relationship. The result was a firm committed to putting clients first. We created an environment where clients can trust the process and structure and have confidence that their advisors are truly their advocates, without the conflict of commissions or product quotas.

Scott is originally from Dallas. He attended Baylor University in Waco, TX, where he received a Bachelor of Business Administration in Finance and Economics. Upon graduation, Scott was one of 80 students selected from a nationwide search to join Chase Manhattan Bank’s Management Development Program in New York City. He then joined Chase Manhattan Investment Services, a newly formed investment advisory business focused on a fee-only, non-proprietary approach to investment management. Scott helped launch their first Dallas office, where he began to develop his own client base.

Most importantly, Scott values faith, family and relationships; everything else is filtered through those priorities. When not working, he most enjoys time with his wife and three daughters, particularly spending time outdoors, snow skiing, cycling, running, surfing, boating or just about any other recreational pursuit.